We finally did it after many years of talking about getting bikes we pulled the trigger. They have been so fun and worth the investment. The kids say "it's a beautiful day outside why don't we go for a bike ride?" just about everyday. Our smooth rider Jonas in his new bike carrier. Every time we walk into the garage to get into the car he says "bikes" he loves them. He wishes so badly he could ride his own bike as he tries to get on every one's ..
even random kids bikes at the park.
He's turning into such a big boy!
There's another seat waiting for little sunshine to join him. 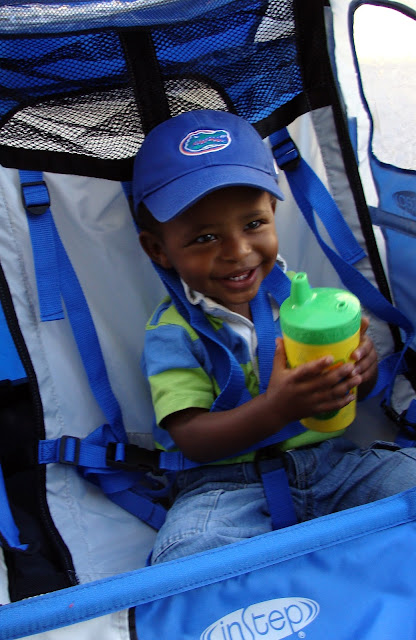 The boys in back 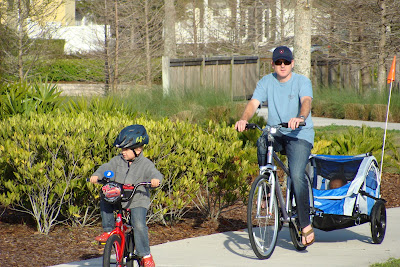 The girls in front
I'm 6 months pregnant and I do get a few strange looks of
"Why is that pregnant lady on a bike?" 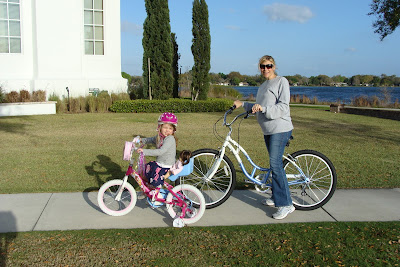 Heading home after stopping to get food to cookout 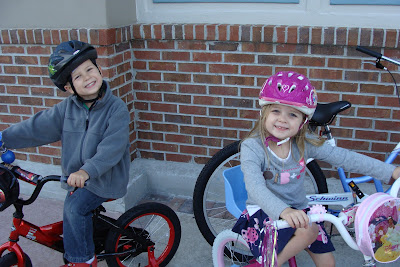 It's funny, we have found out who is competitive.
Brooke HAS to be in front as she wants to go fast and if anyone is before her she puts on this mean little determined face and pushing her heart out to pass you. She has fallen quite a few times because she goes so fast she looses control but this doesn't stop her as she hops right up and to finish the job.
We think it's so funny as she's just so serious about it.
We have now had to have leader time limits to give Parker a chance in the front.
Notice Brooke has her baby doll on the back of the bike ..
what a little mama she is 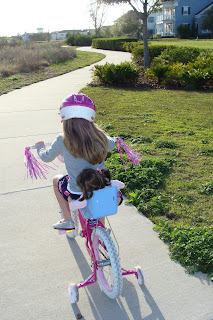 I don't know if you have ever thought about getting bikes for yourselves, if so I would highly recommend it. I know this summer is going to include a lot of bike riding .. at least until baby Sunshine is here.
Posted by the crazy armstrongs at Friday, March 18, 2011

We LOVE our bikes. I rode mine up until the day Mehret was born. I even raced Preston as a way to try to go into labor. I got MANY weird looks because my belly was so big. There is a great bike seat that mounts right in front of your seat, in between your arms. I used it for Kalayna when we were in Hawaii and now I will use it for Mehret this summer. Just another option in case having 2 in the pull-behind doesn't work out (arguing etc.) We go on bike rides almost every day in the summer. It's awesome. I just wish we lived in a warmer climate again where we could do it every day year round, like we did when we lived in Hawaii. We are hoping to head south (FL) next summer though when it's time for Brad to rotate with the Coast Guard. Great pictures!!!!

oh my gosh, who is that big kid sitting in the bike carrier?!
no way...he is getting so big.

can't wait to see you monday!