Yesterday our sweet little Jonas turned 18 months old. It's hard to believe he's been home with us for almost a year. It's really hard to remember life without him in our family. I just can't explain the joy he brings. For me I  love 18 months old.. I feel like it's over the toughest hump between age 13 to 16 months. He understands so much more now and his personality is really starting to blossom. 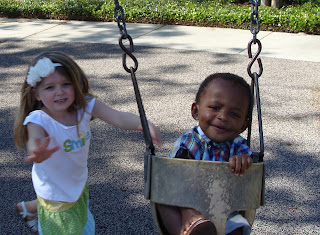 Brooke is pushing Jonas on the swing.  She's adores him, even though Jonas follows Parker around everywhere...he looks up to him so much. If Parker has a car in hand then so does Jonas. Brooke is the nurturer as she kisses and hugs him constantly throughout the day. He knows he can count on her for some loving. 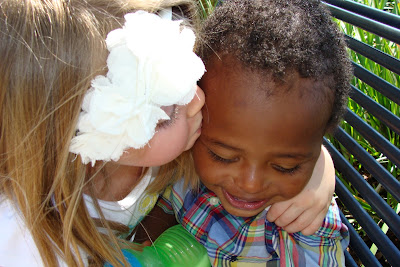 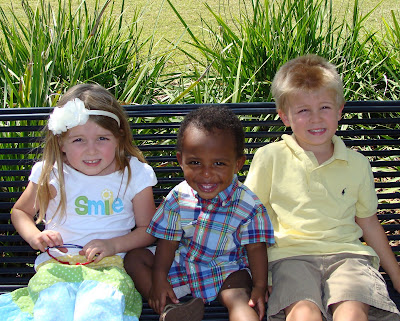 PB&J -What's a peanut butter sandwich without some jelly? 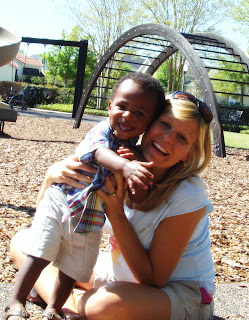 He makes us laugh all the time 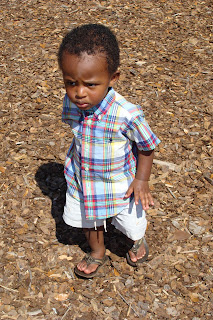 This is his serious concentration face.. his eye brows move down and becomes focused 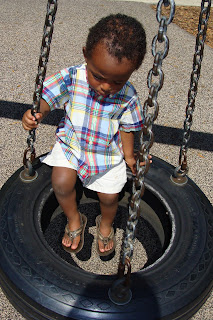 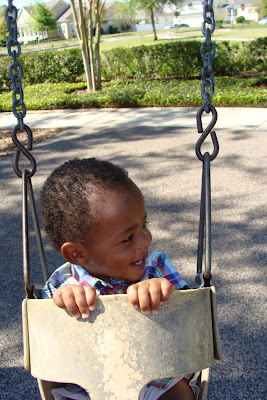 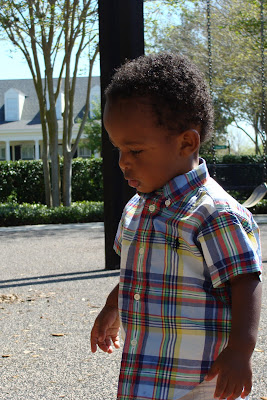 He's watching how Parker is hitting the golf ball.
I just can't tell you how smart he is! He studies things before trying them, you can just see the wheels turning trying to figure something out. 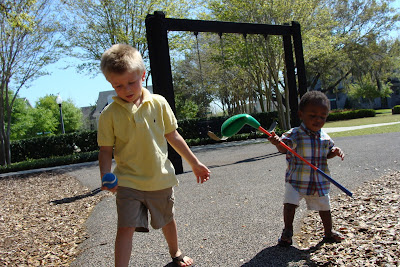 Parker was being a sweet brother and getting him the ball teaching him how to swing.
Now Jonas' turn .... 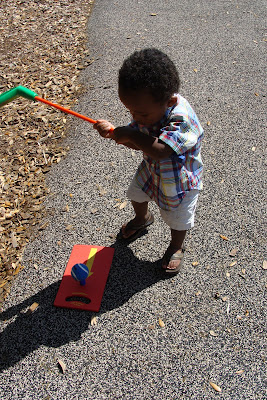 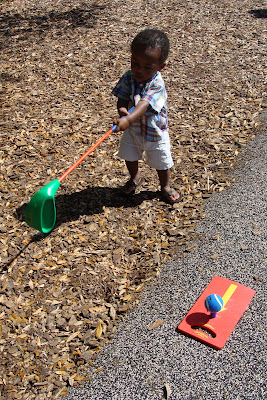 a natural .. maybe the next Tiger Woods .. watch out.
Here's a few fun fact about our little J- Man
- He doesn't understand the difference between Yes and No ..ex. you may ask him you want a piece of candy and he's says "NO" which really means yes.
- He doesn't like the church nursery at all, they have to walk him around the whole time to keep him entertained.
-His favorite food is pizza .. you may ask him in the morning what he wants to eat and he will chant around the house PIZZA! PIZZA!
He also loves hot dogs, they are his second favorite.
-He still struggles with eating as he's really never consistent on what he likes. Sometimes he will eat more than Brooke and Parker then other days not touch a thing.
- He eats so well with a fork and spoon and always wants to use them.
-He LOVES Elmo!! I think he says Elmo about a hundred times of day. It's the only show he will watch.. so he will hand you the remote and say " ELMO PLEASE" even when watching it he has to walk around and keeping busy.. no sitting still for this little boy.
-He has really good manners and says Yes Mam, please, and thank you most of the time.
-He can sing part of the song twinkle twinkle little star
-Grabs his diaper and says pee pee and poop poop .. I do think he will be an early potty trainer.
- Just discovered CHOO CHOO trains and loves seeing them.
-Only has 6 front teeth
-Still loves his passy at night and blanket to cuddle with.
-I do think he's the most verbal 18 month year old ever, maybe I'm just biased but he talks all day and says so many words... see for yourself...
Posted by the crazy armstrongs at Sunday, March 20, 2011

Wow! He is just... A.D.O.R.A.B.L.E.! I can't believe how much he is growing. That video was awesome. He's still got those adorbale dimples!! Love 'em.

Oh my, so cute! Jon and I watched the video and laughed at his sweetness. He is so verbal.

I can't believe he's talking like that-he must be a genius! So, so cute.