I had a clever idea that on Fridays I would do a flashback story that had happen and either didn't get a chance to share or it's a fun memory to document. So many great stories to share and just not enough time to share them. Well, this is one I was actually sharing with my sister this week and thought it was one I need to cherish. 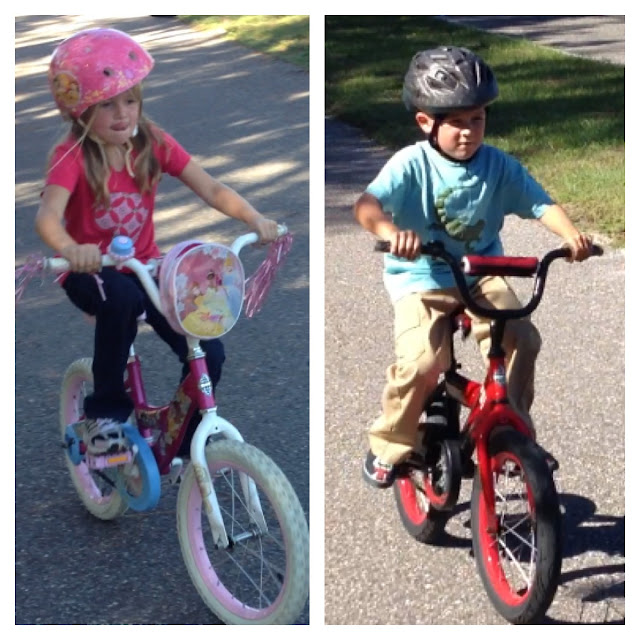 Scott and I were feeling guilty, as our just turned 6 years olds didn't know how to ride their bikes without training wheels. We really hadn't found the time to teach them so one beautiful day in October a week after their birthday we decided to try. We went to this park close to our house that had lots of sidewalks with a small (Florida) hill. After awhile... like few minutes or so ... We were thinking this is going to take multiply visits to this park but at least we can let them see how it feels to ride without training wheels. Fall after fall we thought they were never going to get it! They were both frustrated and thought it was going to be much easier, resistant to take much instruction, Parker headed off on his own to practice by himself. We were focused on Brooke as Parker was done (I thought). She would finally get it for one second and then go crashing into the grass... but she was determined! They both had a little friendly twin competition was shinning through as they inside wanted to be the first to get it. Scott and I were focused on Brooke, when in the corner of my eye is see Parker talking to himself .. maybe saying the things Scott had told him out loud... a few minutes later I see Parker do it all we way down the hill.... I screamed and jumped up and down like a crazy mom while cheering Way to Go PARKER!! I couldn't believe it! He was totally wallaby about to fall any second but made it down to the bottom of the hill into the grass to stop. I ran over and gave him a huge hug... I was so proud of him!!! He was on cloud nine... I said "how did you do it??"were you pep talking yourself into it? No he said I was praying to GOD.... For God to give me the strength to do it! Tears instantly came to my eyes... " really?" he said yes ..God helped me do it! WOW a huge thank you Jesus rushed over me ..thank you for answering his prayer!! What a feeling I felt .. I didn't care at all now if they could ride their bike with no training wheels a bigger lesson had been taught ... If you pray to God for strength he will answer your prayers! I looked up my heart so excited but I looked over to Brooke she was defeated, worn out, sad she wasn't the first one to learn it, and wanting to cry... I'm never going to get this she said. Parker came right over to her and said I prayed to God that's why I got it, Brooke and you should too! So, sweet but she was not in the mood to hear it but she tried again and again very determined. Parker was off practicing and getting it better and better. I could see he was talking to himself again... then Brooke grew stronger and stronger finally getting it further and further until she made it down the hill all the way. Screaming like a crazy mom again, I was so happy for her she stood up so proud smiling ear to ear! Parker came over and said "it's because I prayed for her". Wow, he got it my 6 year old son got it .. what a relationship with Jesus looks like! Just amazing! What a day to remember not only my kids learning to ride their bikes such a huge milestone in your growing up years but that they saw first hand what it means to trust and lean on Jesus and he will give you the strength! One of the first days, I had seen one of my kids use what we had teaching them and really getting it! They rode their bike all the way home not falling once we couldn't believe they had it so well. It had only taken an hour and they were off riding like pros... see for yourself!

Posted by the crazy armstrongs at Friday, January 25, 2013