Sometimes I'm really not sure why but I call Jonas "J-man", probably because he walks runs like an old man and at any minute you think he's going to bite it because he runs with such a forward lean. My little Jonas has been one busy bee this month.. he has kicked it up to a NON stop pace, I mean the boy doesn't stop until his head hits the pillow. At 16 months he is keeping me on my toes literally .. there is no sitting down, the minute I do he is pulling my leg trying to get me to stand up. There are so many funny things he's gotten into lately. One of my favorites was baby powder all in his hair... unfortually no photo. I decided to document a few of his favorite things to get into.. it only took me the typical morning to capture all these shots .. granted you might think I'm a bad mom I would like to think of myself as a mom with three children that's easily distracted:)
He LOVES to tease me that he's about to climb up the stairs .. just for you worry mom's out there ..I usually have a gate but the twins take it down all the time. 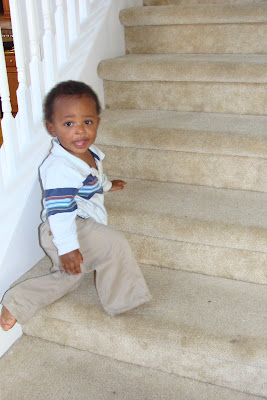 He's saying "pleeez"  can we go upstairs? Off to the kitchen next .. 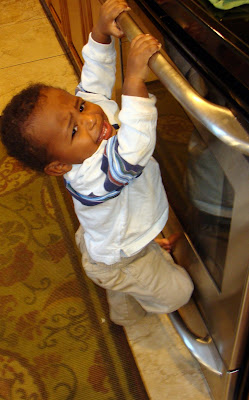 He climbs up the stove .. this time he happens to get stuck and thought he could get down but do you see the left foot actually touching the ground .. a little drama boy at times:) Next off to the back door... 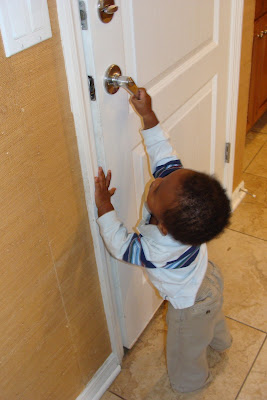 Within the last week he has learned to open doors around the house. This one is tough as the twins can never remember to lock the doors behind them.
Now into his favorite room, The Bathroom 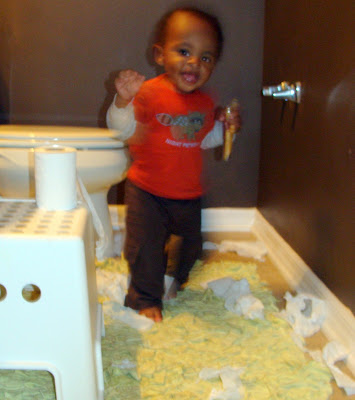 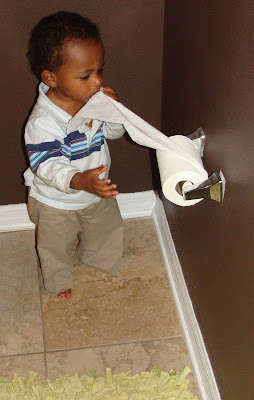 On the left he's pretending to blow his nose into the TP. I stopped him before the bathroom looked like whats on the right as he did this a few weeks ago... he loves to shread the toilet paper into pieces around the house. Also what's more fun than pulling out all the wipes?.. he could do this for hours. 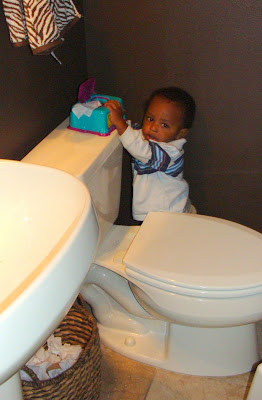 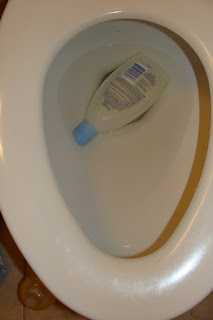 Right before bath time I go to get his PJs and I hear" uh oh".. he had dropped the baby wash into the toilet.  When he's not playing in the water he loves to drop everything in the toilet. We have had cars (one actually got flushed down the toilet no plumber problems yet knock on wood),
a hairbrush, a bar of soap,  a couple of books. 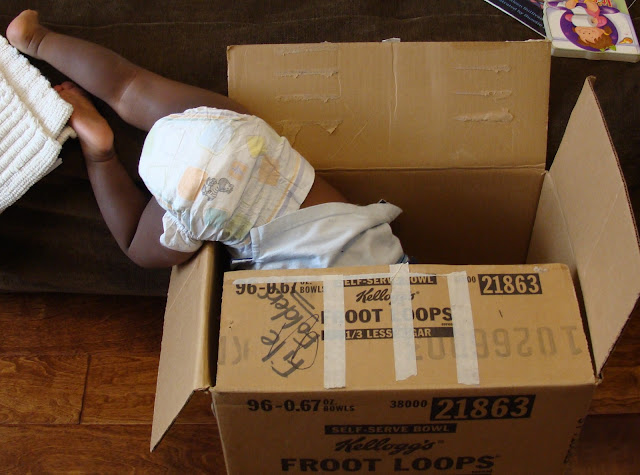 My favorite ...I gave Jonas a fun box to play in while I tried to pay bills, within a minute I hear him grunting and I turn around to see him upside down in the box.. he's laughing as I'm laughing and then wants to do it over and over again because i thought it was funny. He's such a ham. That's all I captured for one day, then the next morning within an hour he has dumped out all the business cards in my purse and taken dog food from the Lucky's bowl. You can see he's trying to get away before I see him do it. 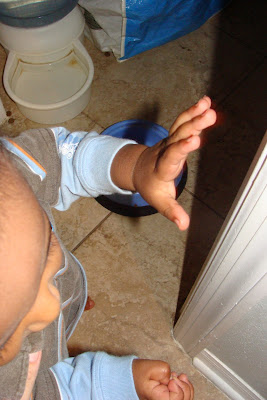 If you've been wondering what I have been up to this last month, this is it every minute of the day. I know this stage will too pass and I have to stop and laugh. If not I might go crazy so i do a little bit of both. Yes, J-man you keep me on my toes that is for sure but I wouldn't trade it for the world.
Posted by the crazy armstrongs at Sunday, January 30, 2011

Amaya does the exact same thing on the stove. Actually I think we have the same stove as you. I am always afraid she is going to pull the door open and fall back real fast. It scares me. I have now set a rule that all the kids have to be out of the kitchen when I am cooking (unless it is a time when they are helping me) otherwise I am afraid she is going to get burned. She could so easily reach up and touch the hot burner. Ahhh, toddlerhood. One good thing is that I am loosing the baby weight faster than I did after having Preston and Kalayna. I just don't have time to sit and eat as much or just simply sit. =)