Lucky is our first adopted child 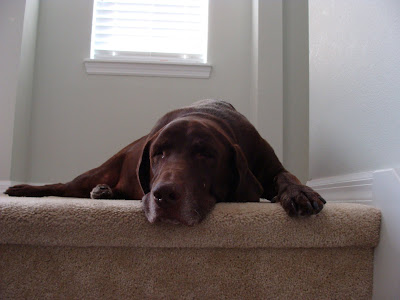 Our dog is sad, maybe even depressed. I just know he's thinking "Really? You added another kid to pull on my fur, and to take more attention away from me? I never get walks, I hardly ever get any good rubs and never get to go to the dog park to socialize". Poor Lucky .. I feel like he might sit around all day and dream of the good old days when we was our only baby. We spoiled him with car rides where he could hang out the window, racing to catch the trains so he could howl at them, and unlimited trips to the dog park. He also used to sleep in our bed...right in between us. Oh, I didn't tell you he's huge now weighing in at 118 pounds. Below is a picture of when we first got him... i believe he was around 75 pounds. 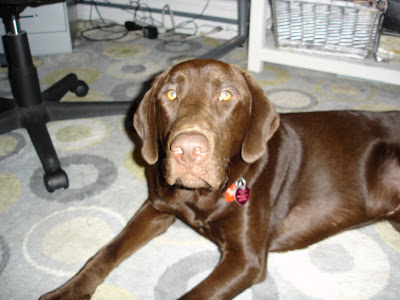 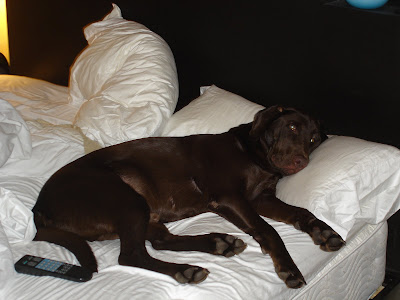 Yes that is a remote laying next to him while watching animal planet.

He used to have a doggie door with a bigger back yard (old house) with neighbor dogs that were so fun to chase and yes sometime hump, haha.

Lucky does have a great responsibility now in our house to pick up the crumbs all the kids leave behind and protect me when Scott is gone away. I think I need to rent Marley and Me and feel a renewed love for him... poor boy.

He too also has a story in our family. My sister jokes that we have a story for every event in our life! I really think God wants me to write a book someday, he's given me a lot of material.

It all began 6 years ago when Scott and I went to visit my grandmother in Kennett, MO (very small town) during the July 4th holiday. My side of the family are farmers, cotton farmers... and on our visit we decided to show Scott all about our family farm. We took him to the old gin and showed him how cotton is picked, the equipment they use, how it's irrigated, etc... Our tour of the farm was cut short when a storm started approaching, so we headed to the main office. While showing Scott the office it starts to rain and we decide to wait until it blew over to leave. I was talking to my grandma and noticed something at the front door... a brown scraggy looking dog all wet laying next to the door. I thought at first it was just a dog they had around the farm but then learned from the secretary he was a stray. My ears perked up.. I think I said "ahhhh" a hundred times and I went to pet him. She continued to tell me that she had been feeding him and thinks someone dump him in the middle of nowhere.. which I guess was common around there. He had been there for a week or so and didn't seem to belong to anyone. She told us he was just the sweetest dog and not sure what they were going to do about him. My mind was racing thinking "I have never had a dog, what if we could take him, he's just so sweet". I looked at my husband as he didn't want to pay much attention .. I said "maybe we need a dog".. he said "no I think were good". Then I said "no really honey, look at him he needs a home poor guy". I kept begging to Scott when my grandmother said she would pay for the vet bill to get him checked out. Still Scott is not at all convinced.. I think at this point he was beginning to ignore me:) You know men, they need their time to process stuff :) I couldn't stop thinking and falling in love with him! He followed us all around, we got in the car to leave and my uncle had to tell him to move so we could leave. I watched him as it was starting to rain again slowly and I was sad as we drove away. I talked to my grandmother and she was all for it... we were sitting in the backseat. Scott and my uncle were in the front seats as we headed down a long dirt road. I stayed persistent with my pleading "why Scott? We could totally take care of a dog, I've always wanted one!" We even had a doggie door at our new house :) Scott was not buying it... he was too logical... how would we get him home? We are in Missouri and we live in Jacksonville? After about 30 seconds of driving Scott looked in his right side mirror and saw something he couldn't believe. Scott always says that he knew this was a defining moment in his life. He knew at that moment if he told me to turn around and look out my window, his life was gonna change...quickly. Scott couldn't help himself... he said "Heidi, you might want to turn around and look out your side window". I looked and there was Lucky running his heart out right next to our car. My heart jumped and told my Uncle to pull over... this dog was mine!

We got him checked out and he was totally healthy, just a little under weight. We canceled our flight home, extended the rental car, and drove back 15 hours with our new member of our family. They think he's mostly Labrador and was about 1 year old when we brought him home.. so now that would make him about 7 or 8 years old. He truly has been the best dog... so laid back and easy going. Scott now gives him more attention than any of us. He is truly in love with him! It's so true what they say about a man and their dog.

Jonas has slowly warmed up to him but was not so sure in the beginning! He will let all the kids just roll on top of him and wants to cuddle with anyone who will love on him. Poor boy does have grey hair now probably because he has so much to care after. Thanks Lucky for protecting and loving us even when so little attention is given to you. You are the best Dog ever! So, truly Lucky is our first adopted child. 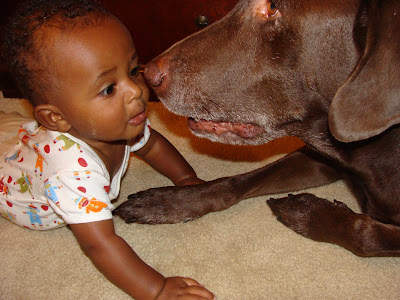 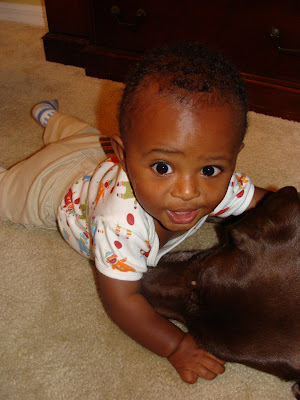 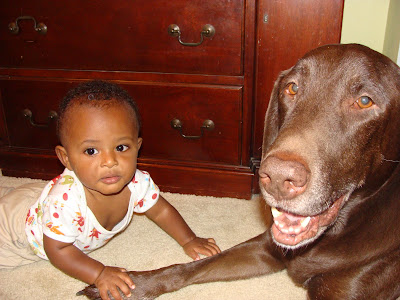 I love this story. Our first "baby" was our boxer Sydney who died 1.5 years ago of cancer and we are still devastated without her here. Cherish every last moment you have with Lucky. When he is gone, you will cry more than you could imagine you would. I now feel guilty that Sydney didn't get as much attention once the kids came around. She too was the BEST with the kids, protecting me while Brad is gone (which is often because he's in the military), and just always there for us. I wish I could give Lucky a big old hug and a treat! We're definitely dog lovers in our house. I'm so happy to see Jonas doing so wonderful too. I'll never forget all his giggles at the care center when we were there the very end of Jan/beginning of Feb. I couldn't stop giving your handsome boy kisses and hugs from you guys. It took Beau and Amaya a while to warm up to our dogs, or any animals, but now they LOVE them. Of course our 2 dogs have loved them to pieces and just never understood why they were afraid of them. Thanks for the great post.

This story warms my heart. Lucky is like our poor Shiloh. Someone new is in the house and they're no longer the "baby." But we still love our pups, right? Lucky's story makes me want to go hug Shiloh now. Off I go to give her some lovies. Thanks, Heidi!

I love the story. While I have never had a lab, I always heard they have the best personalities. He looks like a sweetheart.

I love Lucky! He is such a sweet dog. I never knew how you got him...how perfect. Thanks for sharing.