The meaning of Jonas

I can't tell you his original name yet .. not until we get him home in 20days:) but our agency told us that an English version would be Jonas.
I read the book in the bible and it seemed to be perfect to represent him.
Jonah (or Jonas)
Jonah, was born in Israel. He was called by God to preach repentance to the capital city was Nineveh. However, Jonah rebelled. Jonah didn't want to preach to the pagans of Nineveh. So, Jonah tried to escape God's plan by fleeing on a ship. But Jonah was thrown overboard and swallowed by a great fish. Later, the fish spit him out on the shoreline. Then, finally, Jonah obeyed God's command and went to Nineveh to preach. His preaching was successful and 120,000 people in Nineveh turned to God in obedience, sparing themselves punishment from God. Jonah's time inside the fish is used as an example of Jesus' burial in Matthew 12:38-41. The basic theme of Jonah is that God declares His love for ALL men, whether they are Israelites or not. Jonah was unable to love the Nineveh people properly, but God desired nothing for them but their salvation, and so He sent a prophet Jonah to preach repentance. Jonah, means "dove". The Bible's book of Jonah is the 5th of the twelve minor prophets.
The main purpose of this story was to show the extent of God's GRACE. To send a message of salvation is for ALL people.
So after reading the book in the bible I knew it was the perfect name for him. Now we have decided to decorate his room to remind him the meaning of his name. 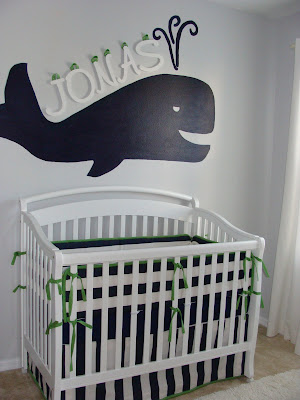 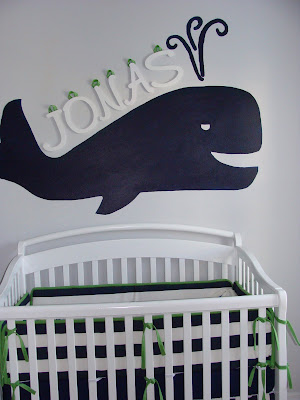 Posted by the crazy armstrongs at Tuesday, April 06, 2010

ADORABLE! I love it.
Great job. Can't wait to see pictures of him in his room.
Blessings,
Amy

I love his name! And his room too! Looks wonderful.
Praying for you as you travel, Carissa

What a great story! God is so good and it amazes me how specific he is for each of our lives. I am praying for you and cannot wait to meet your sweet little Jonas! Blessings!

Heidi,
I love his room; it's beautiful!!!! WE are praying for safe travels and abundant blessings over you and your family.
It seems like yesterday when we were talking about getting a referral. Here we are!!!!
Love
Aimee

Be blessed and be safe. Phyllis and I are praying for your safety as you travel and that any and all details are taken care of as only our loving heavenly Father can take care of them.