Our Trip to Jaskson TN 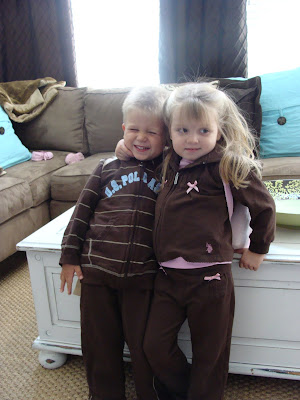 Getting ready to leave.. we are all set for the big trip! My cousin Emily got married in Jackson, TN. Brooke is the flower girl and Parker is the ring bearer. We have new backpacks full of goodies for our 1st ever plane ride. We picked up my mom and were on our way....Yes, my mom came it's her 1st plane ride in more than twenty years. 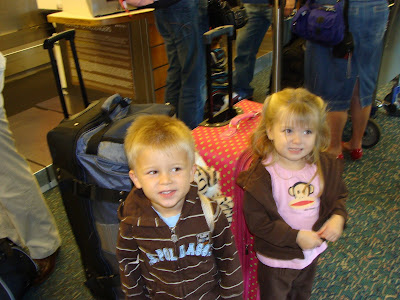 Brooke and Parker were full of excitement when we arrived at the airport.... with a few screams and runs in the hallway everyone could see they were VERY excited! 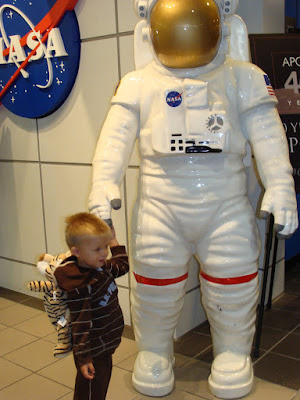 Parker saw an NASA astronaut..he wanted to hold his hand. By the way Orlando airport has so many fun things 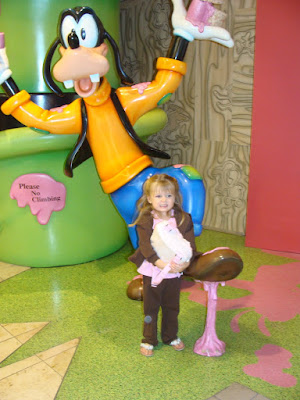 Brooke loves Goofy and thinks he's so funny. Who needs Disney world with real characters when they just get scared of them. They had fun running around all the shops. 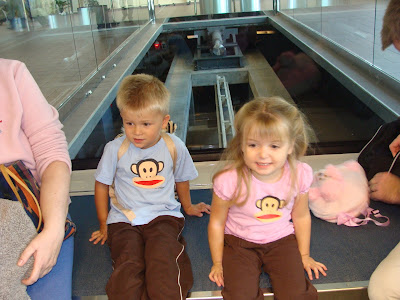 Our next stop was getting on the train. If you know Parker you know HE loves his trains.. this was a highlight to his trip. It was a good airplane flight! Parker sat with me and we kept counting 1.. 2... 3 blast off while the plane was taking off. Brooke did get some ants in her pants towards the end of the flight but not bad. Thursday night we arrived safely... got a rent a car and drove up to Jackson after Scott found some good Memphis B-Que.
Friday was good we went to the Casey Jones Museum 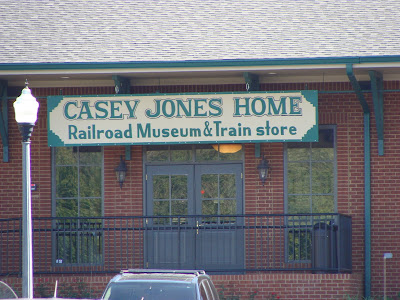 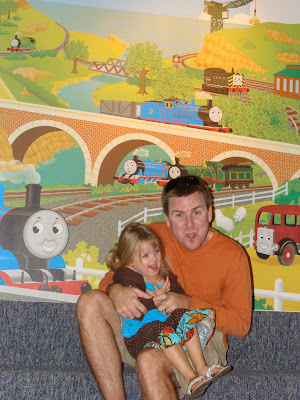 It told the story of Casey Jones but also had a lot of Thomas the Trains there. 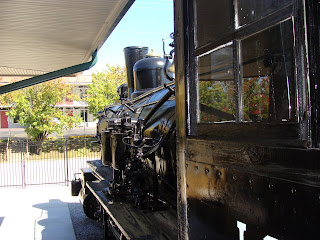 A replica of Casey Jones steam engine .. we got to go aboard but Parker and Brooke were scared of it? It was downhill for Parker from that point on.. he felt warm to me.
After short naps they were ready as they were going to be for the rehearsal for the wedding. 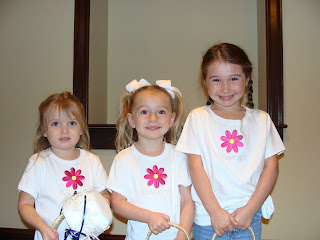 These were the 3 flower girls dressed in their flower girl shirts at the rehearsal dinner. Brooke is very proud! Parker was having a rough time .. not feeling well. Later that night he got sick.. REALLY sick all over Scott.. poor guy. To be honest we tried to make the most of it but it was hard he just wanted to be held .. and sleep. The next day Saturday the wedding Parker was a trooper still had a fever but made it to the wedding to walk down the isle. Here is a picture of his cute true southern outfit for the wedding. 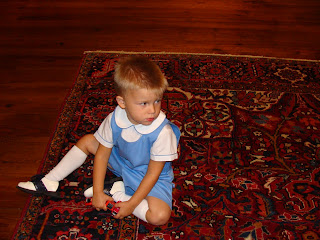 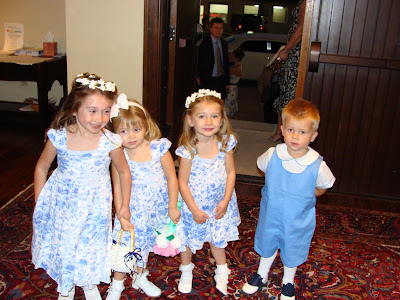 Here are the kids ready for the wedding Olivia, Brooke, Emily and Parker. Brooke was a perfect flower girl new exactly what to do! She loved every minute of it. She sprinkled lavender all the way down the isle.. leaving Parker in the dust and last to go down ..all eyes were on him and the big question does Parker finally walk down the isle? I was down at the other end so Parker just walk down the isle to me .. Scott was getting him started .. he headed down fine for about a minute then he said MOMMY? he couldn't see me with all the people .. I was waving saying Parker here I am.. but didn't see or hear me .. he got louder MOMMY? MOMMY? still not seeing me he turns around and runs back to Scott .. I don't see MOMMY? So, he won't now go down without Scott .. so, now Scott and Parker are the ring bearer. Cute .. still saying MOMMY? MOMMY? He finally see me and runs to me leaving Scott .. So, I guess the answer is yes he walked down the isle but not exactly like he was suppose too. Of course the only one that was really worried to death about it was Me being the mom. Just what I thought would happen .. happened:) It was a beautiful ceremony and so glad we could be a part of it! Here are a few other pictures from the wedding. 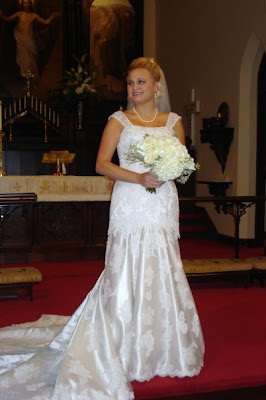 The beautiful bride my cousin Emily 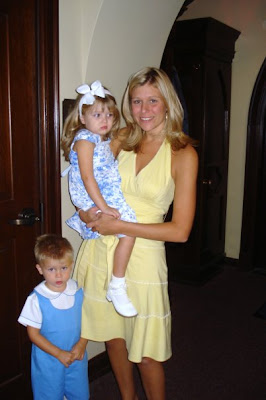 Brooke and Parker are nervous about walking down the isle. 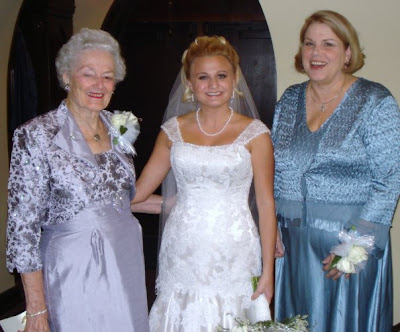 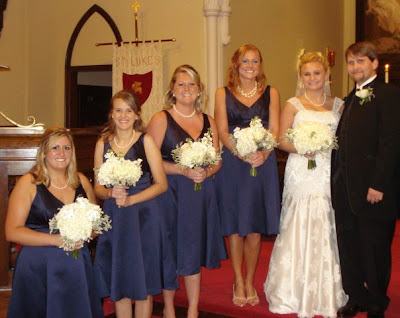 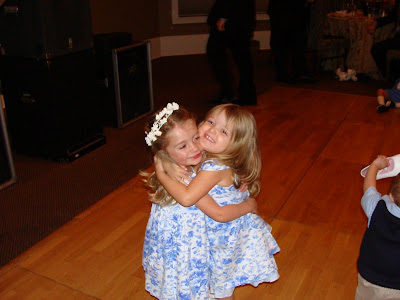 Brooke was a dancing the night away with her new friends .. she had so much fun on the dance floor! I never knew she had so many dance moves. Overall, we made it with Parker not feeling well.. poor guy. Our trip home was a tried one and we were thankful to be home. I would be lying if I said it was easy to travel with 3year old twins... but it was all worth it to see Emily and Danny get married to wittiness such a loving couple unite. I'm so glad we could be a part of it! Thanks Emily and Judy for including us in everything .. it was a very special trip for us and one we will remember. Here is a picture of Scott and Brooke on our flight home! 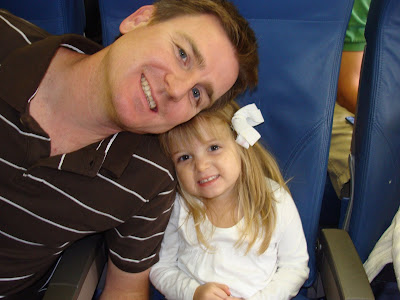 Posted by the crazy armstrongs at Tuesday, October 06, 2009